Following is an essay I wrote for Composition 2. Which is why I’ve been so quiet for the past 2 months. I’m in school through Kaplan University studying Nutrition Science. I’ll graduate in November.
Network marketing is an industry that is exploding. And the reason is simple “An estimated 38 million households in the U.S. live hand to mouth, meaning they spend every penny of their paychecks.” (Lake, 2016, paragraph 7). Therefore, people should seriously consider network marketing as an additional source of income because of the residual income they can build. Why network marketing compared to another home-based business? One, the average person can do network marketing effectively. Two, the success one achieves is dependent on himself or herself. And three, business leaders and celebrities endorse this line of business. In this essay, proof that confirms all this will be presented.
Why are people against this industry? There are five basic reasons for this, which is summarized from the article “Network Marketing—The Truth, The Hype, and the Opportunity.” (Nichols, 2010) First, the so-called pyramid scheme. In this industry, we become leaders by developing leaders. One person is not at the top. Second, some people believe that no one can make money in this industry. This is false. I have many friends who make anywhere from $500 a month to over $10,000 a month in this industry. Plus, the Network Marketing industry is growing consistently every year. This chart based on data from The Direct Selling Association from 2013 to 2015 shows this 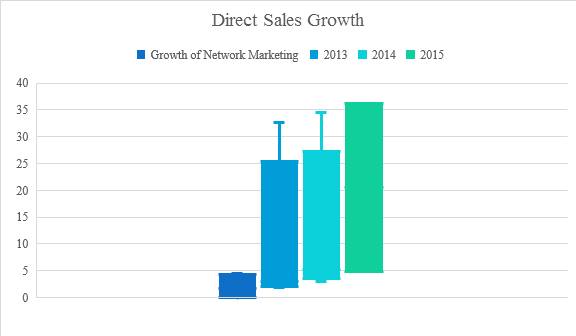 Third, that this is a “get rich quick scheme.” This is a business, and it takes time to build it. One should plan on from three to five years of consistently working on this business to be where it can be done full-time. Fourth, the products are hyped up. This does happen unfortunately. However, if one hears this, then that person should tell the person saying it to prove it. Some products do work rapidly, but in general, this is not the case. And the fifth reason is inadequate training. Companies are taking this seriously across the industry and developing plans to help associates become successful. Plus, there are outside resources from Network Marketing Pro and Social Network Marketing Academy to help achieve success. Network Marketing Pro can be accessed by going to the website by the same name. The same is true for Social Network Marketing Academy. Both can also be found on Facebook as well.
Who does network marketing? In this industry one will find people from all walks of life as well as different careers. One will find doctors, lawyers, teachers, students and stay at home parents. One friend named Alan Sickman said in a private discussion (I) “was at the end of my career in the military. Evaluated options and found Network Marketing offered the greatest potential for freedom and income.” He is now a Crown Diamond with Max International, the Glutathione Company. I quoted him with permission. One will also find famous people in this industry. People such as Chuck Norris who is the spokesman for Max International, The Glutathione Company. Megan Fox who endorses Avon, and Carmen Electra who endorses Global World Trade. (Nuyten, 2014). There are many others as well. President’s, former President’s and business leaders also endorse this industry. President Donald Trump, endorses this industry. Former President Bill Clinton said “You strengthen our country and our economy not just by striving for your own success but by offering opportunity to others…Your industry gives people the chance, after all, to make the most of their own lives and to me that’s the heart of the American dream.” (Russel, 2015). Warren Buffet endorses this. Robert Kiyosaki said “The richest people in the world look for and build networks. Everyone else looks for a job.” Bill Gates said “If I would be given a chance to start all over again, I would choose network Marketing”
What is success dependent upon? One, willingness to learn new skills and apply them. John R. Hobbs’s said:
“if one is motivated, flexible, want more of a work-life balance. Or if one enjoys networking, recognition of accomplishments, and/or entrepreneurial opportunity. Including earning extra income, or the ability to drive their own career. Or wants to purchase products at a discounted price: this is for that person.”
Finally, to be successful one needs to learn some basic skills. Which is simply learning to talk to people effectively. And with a purpose in mind. One purpose would be using the product or service. The other purpose is joining the business. There are seven specific skills that Eric Worre teaches in Network Marketing Pro. One, finding prospects. Two, inviting them to look at the product or service. Three, presenting the product and/or business. This is most effective if done separately. Fourth, following up with him or her. Fifth, closing which is getting them started on either the product, service or opportunity. For those who join or begin as either a customer or business associate step six is getting people started. And last, for those who join the company, the associate will promote the event. Social Network Marketing Academy is a wonderful resource for finding resources and inviting people to look at the product, service or opportunity.
In closing, if one decides to join a network marketing company there are four things to consider, which I learned from “Rise of the Entrepreneur” (Powerhouse, 2016) documentary published by Network Marketing Pro in 2015 and became open on YouTube in 2016. One is the product or service. One, does he or she like it? Two, is there a need? Three, does the product meet that need? Four, is it priced to sell? And fifth, is it priced for profit? Next, one should look at the company. Is it run well? And does he or she believe the management team is effective? Also, are there videos or other things available to show how the products or service work? Third is the compensation plan. Can people generate income quickly and develop a moderate part-time income within a reasonable time frame? And is there the possibility of full-time income? Last, one should look at the support. Is there a website? Is there comprehensive training? Are events hosted? The person considering this company should also look at the leaders above the person introducing them. Does he or she have good support in place? Especially if the person is new to the industry. The support may or may not be in the person’s upline. The important part is: does he or she have support?
In closing, at the beginning of this essay I said one should consider network marketing because of the residual income they can build. Jackie Ulmer said ““Residual income in network marketing is income you continue to earn based on efforts you put forth initially.” (Ulmer, 2010). One develops residual income by building a business. Which although does take time, it is worth it as myself and many others around the country are doing or have done.
References
Direct Selling Association, (2015) Factsheets. Retrieved from http://www.dsa.org/benefits/research/factsheets
Lake, Rebecca, (2016) “23 Dizzying Average American Savings Statistics” Retrieved from https://www.creditdonkey.com/average-american-savings-statistics.html
Nichols, R., & Seward, S. (2010). Network Marketing—The Truth, The Hype, and the Opportunity. Home Business Magazine: The Home-Based Entrepreneur’s Magazine, 17(6), 14-58.
Powerhouse France. (Oct. 7, 2016) The Rise of the Entrepreneur. Retrieved from https://www.youtube.com/watch?v=JW6uGqCvTqI&index=14&list=PLUES6qQyo7jMJ4YjYPFutG6-PCeAU2eku
Russell, B. (2015) 5 Business Magnets Who Endorse Network Marketing Blog. Retrieved from http://www.bradkrussell.com.au/5-business-magnates-who-endorse-network-marketing/
Ulmer, J. (2010) How Residual Income Works in Network Marketing blog. Retrieved from http://jackieulmer.com/how-residual-income-works-in-network-marketing/